After the ski-touring trip the team made the first week of February, Tino and I decided that we couldn’t wait until May to see the Alps again and make some tours!

Especially the idea that in the beginning of March there was still an opportunity to climb some frozen waterfalls was appealing. That, together with the possibility to crash at a childhood friend of mine, made it an easy decision to head for Chamonix.

FRIDAY After a long night of driving we arrived at my friend Benjamin’s place Friday at 04.00 AM. Luckily he could wake us up at 8.30 AM as he was heading for work. Tino and I on the other hand immediately sorted out our gear and went to check out the ice at the lower waterfalls of Cremenie, Argentière.
Just a 20 minute walk from the parking below the Helicopter platform brought us to the ice. It looked good but as it was a warm day in late season so we had to be careful. 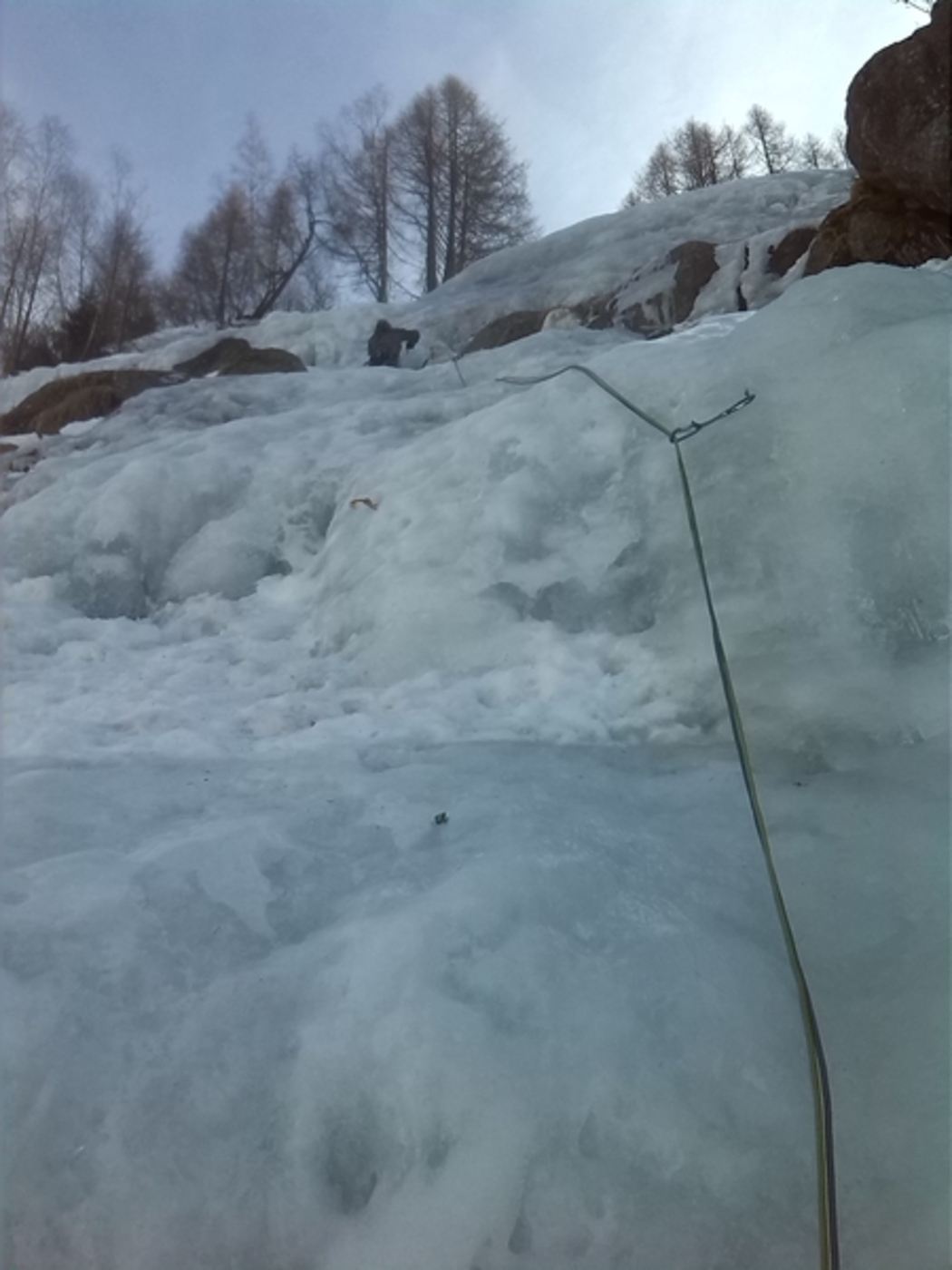 For me it was the first time in waterfall ice and I was pretty excited to start by leading the first pitch. We took our time and practiced our axe and ice-crew placement, because that's where training is for. After three hours of climbing (and a sketchy step over perhaps a bit too thin ice) we made it to the top of the fall.
After some homemade energy bars we abseiled down and ended the day by practicing some abalakovs. 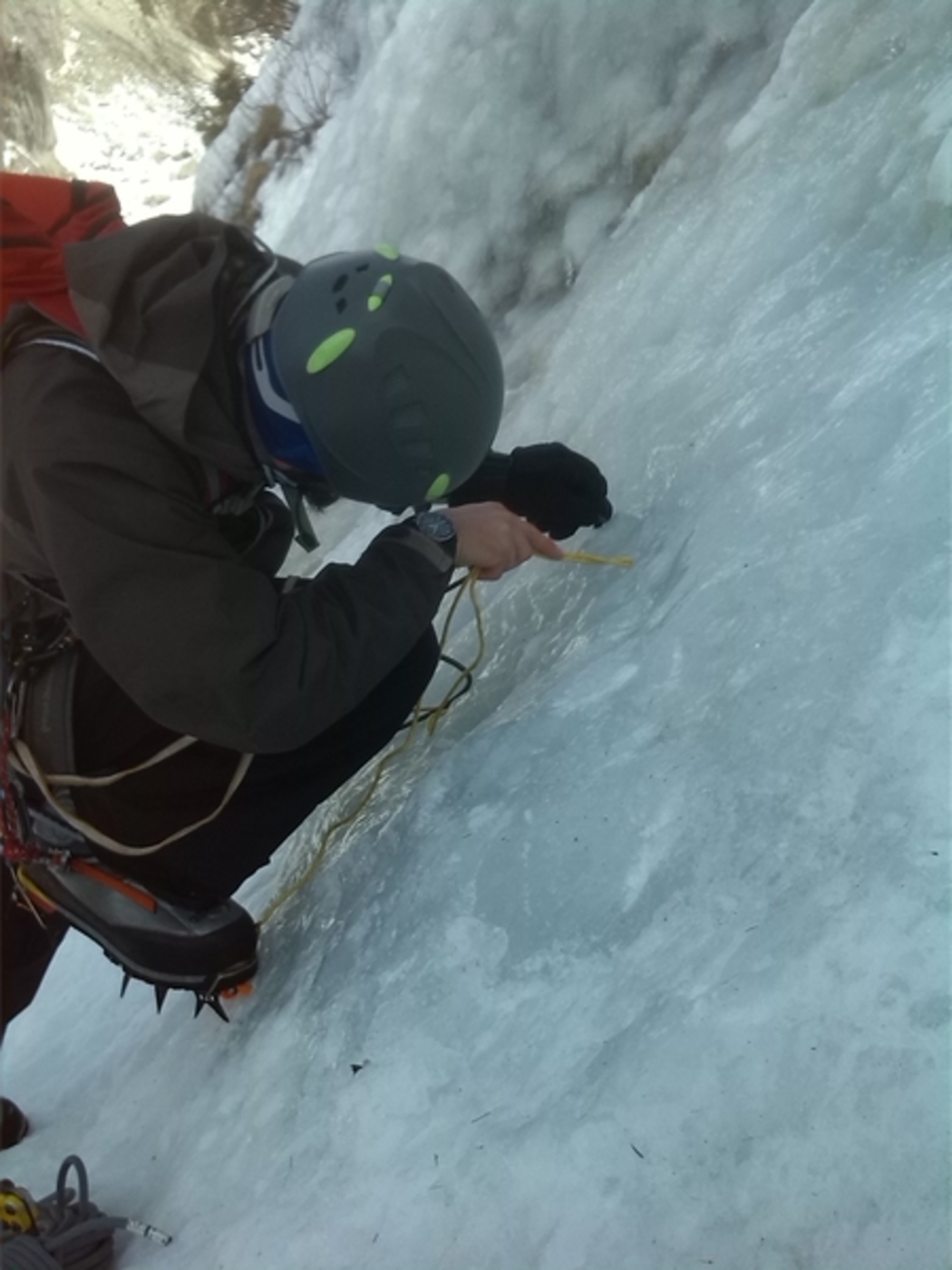 Tino pulling the rope through the ice

SATURDAY On Saturday and Sunday Benjamin was free from work and could join us for climbing. I've had my eye on the Chevalier couloir (AD+) on the Petite Verte for some time now and with its steepness of 50-55 degrees average, it is a perfect training for what’s ahead of us on the Kang Yatze. 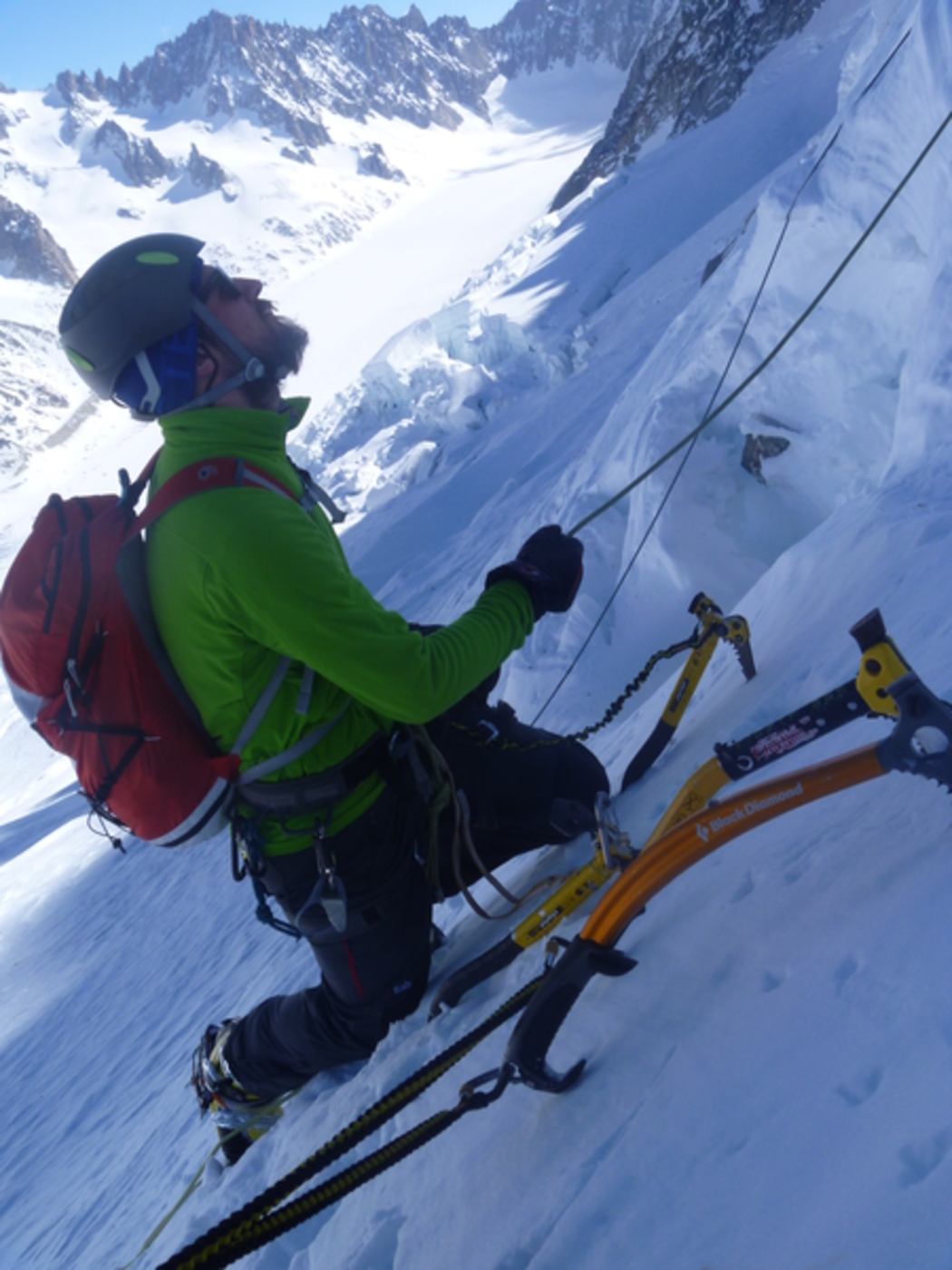 The conditions in the couloir where close to perfect and by climbing simultaneously we made good progress. We climbed the couloir base to top in 2 hours and made the last bit to the top in another half hour. We were super happy to climb this fast without being acclimatized first and obviously our hard training in Holland paid off. 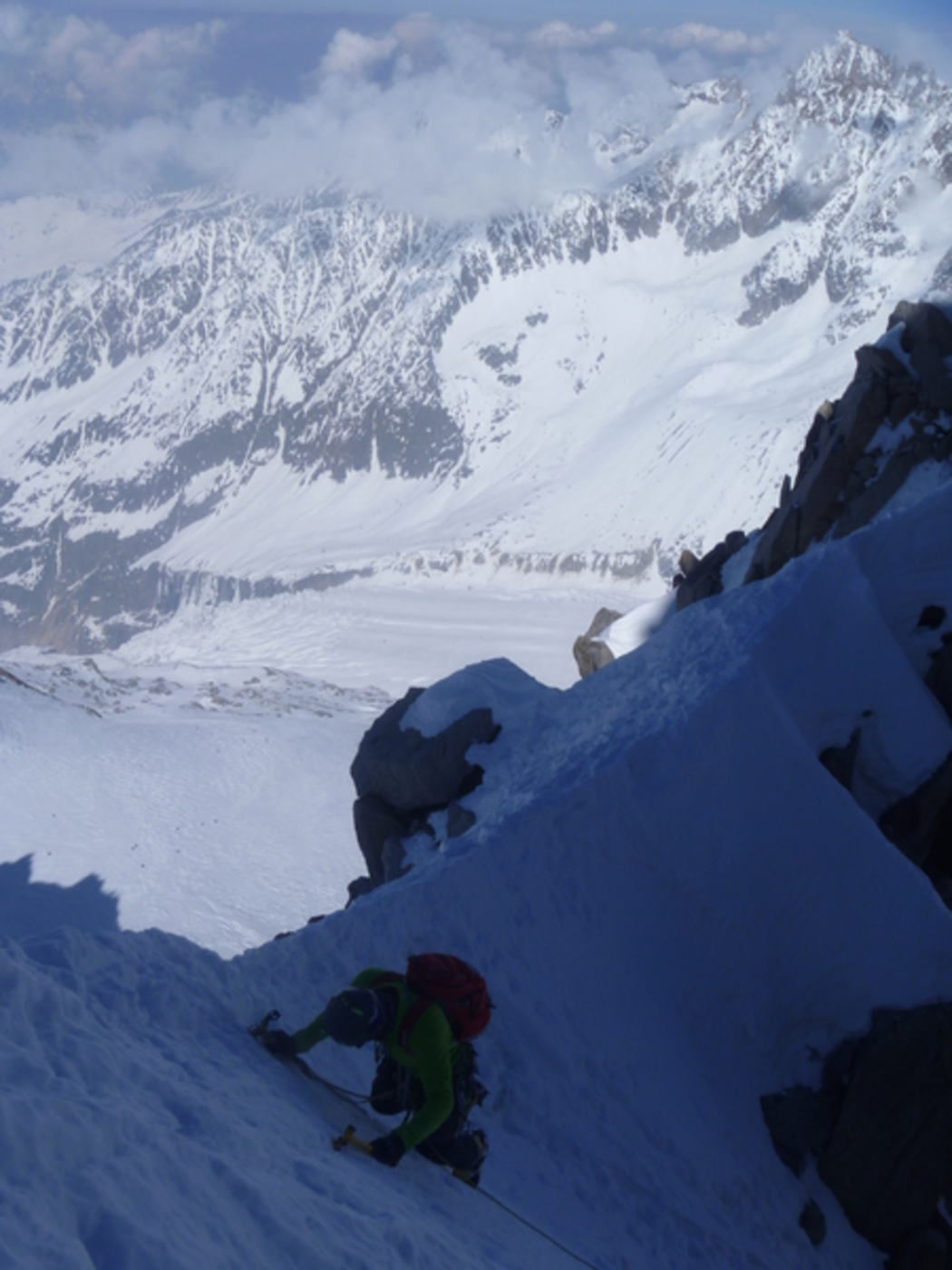 Tino climbing the last bit out of the couloir

The views from this spot are truly amazing as you look out over the complete Argentière basin and on the other side down to the Vallée Blanche and of course the Aiguille du Midi.

Raoul and Benjamin on the top of the Petite Verte

After three rappels down we crossed the bergschrund and walked the easy slopes on the north face down and back to our skies at the base of the couloir. When we started skiing down we noticed how tired our legs had become and the icy piste down was not very fun for all of us. All this was of course forgotten by the time we could drink a nice beer to celebrate our victory of the day. 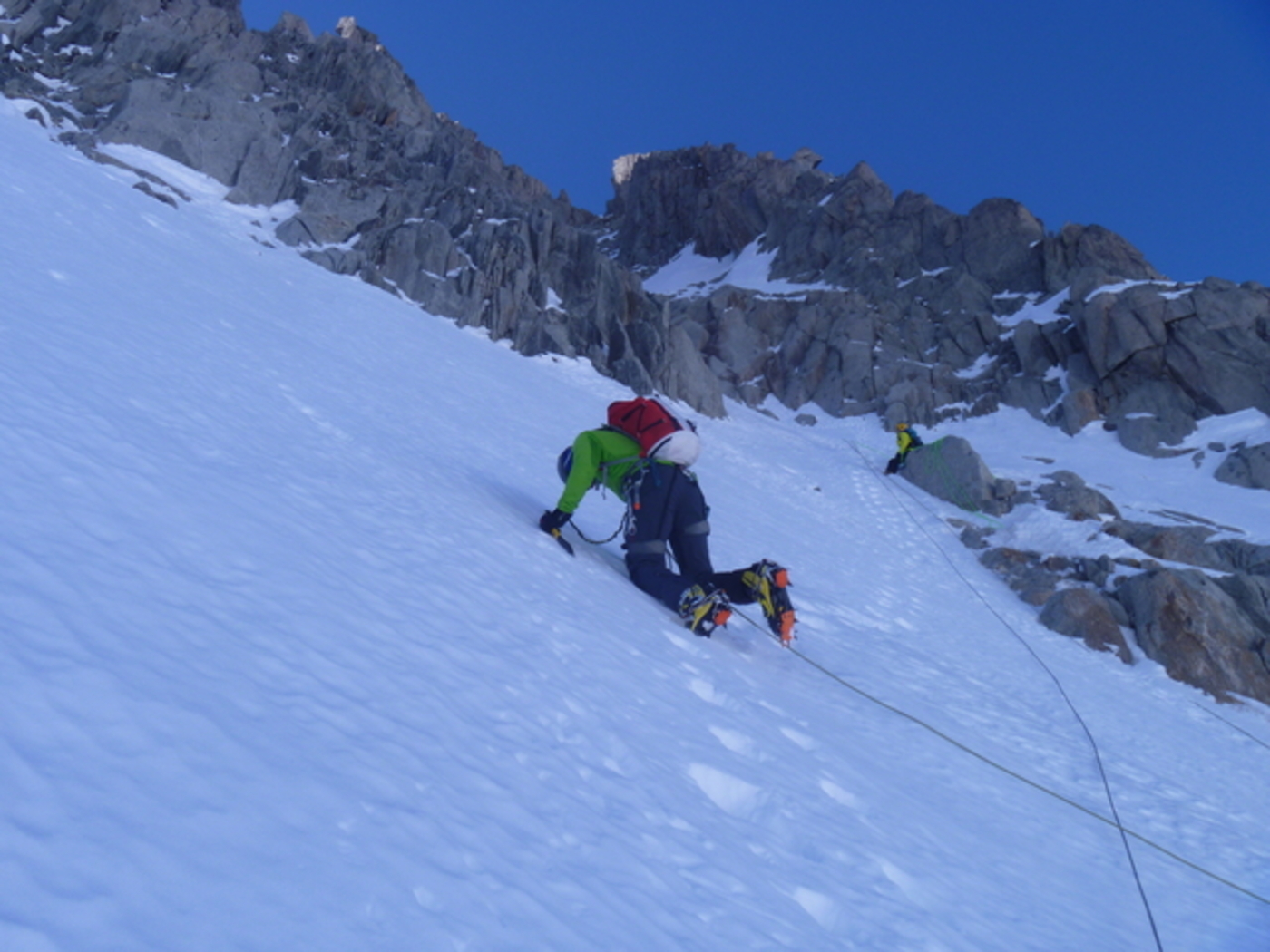 Tino in the first pitch

SUNDAY After a long discussion on what to do on Sunday we decided to really test ourselves and take a shot at the Chèré Couloir (D, 85 degrees) on the Mont Blanc du Tacul. After the tour on Saturday and a short night sleep we arrived at the bottom station of the cable car to the Aiguille du Midi at 07.00 AM a bit tired but excited! However, when we arrived at the top station (3842m) we found ourselves in a complete white out with wind gusts over 60km/h and a windchill of -25°C. This was not what we had expected by "Mostly sunny with some clouds in the afternoon". We decided that this where no conditions to go out climbing, especially in the Chèré Couloir. 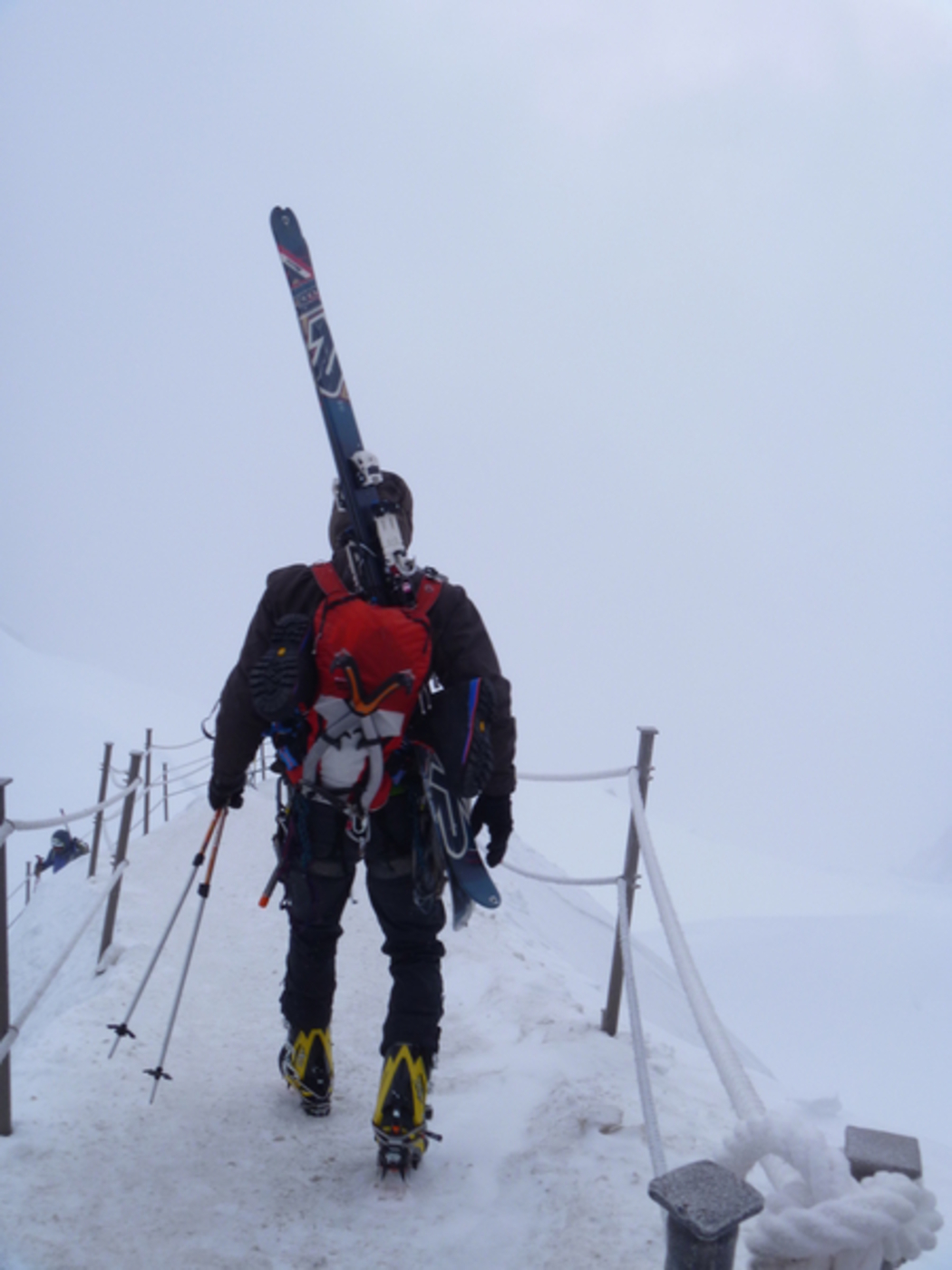 Tino heading down to the Vallée Blanche

Because Benjamin skied Vallée Blanche five times the past two weeks he knew the route even in the misty weather and after a half hour of skiing roped up through the clouds, the weather cleared and we had a beautiful ski down the valley. 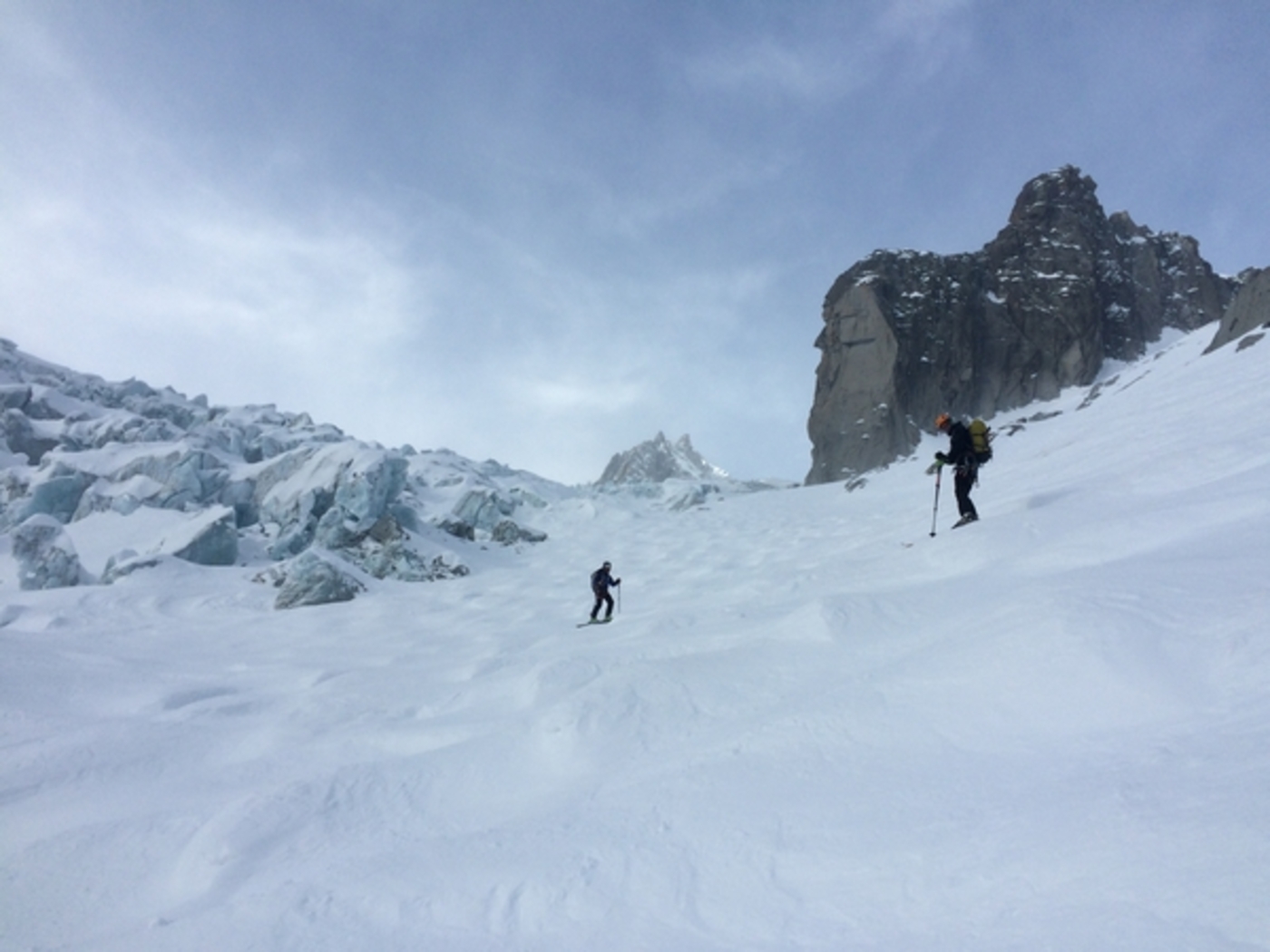 Skiing down the Vallée Blanche

The three hour journey with the overwhelming glacier seracs and great Chamonix mountains around is something we recommend to everyone especially when the snow conditions are somewhat better than we had!

Special thanks to Benjamin for his hospitality this weekend and till next time!

And of course some more foto's:

Skiing close to the massive seracs 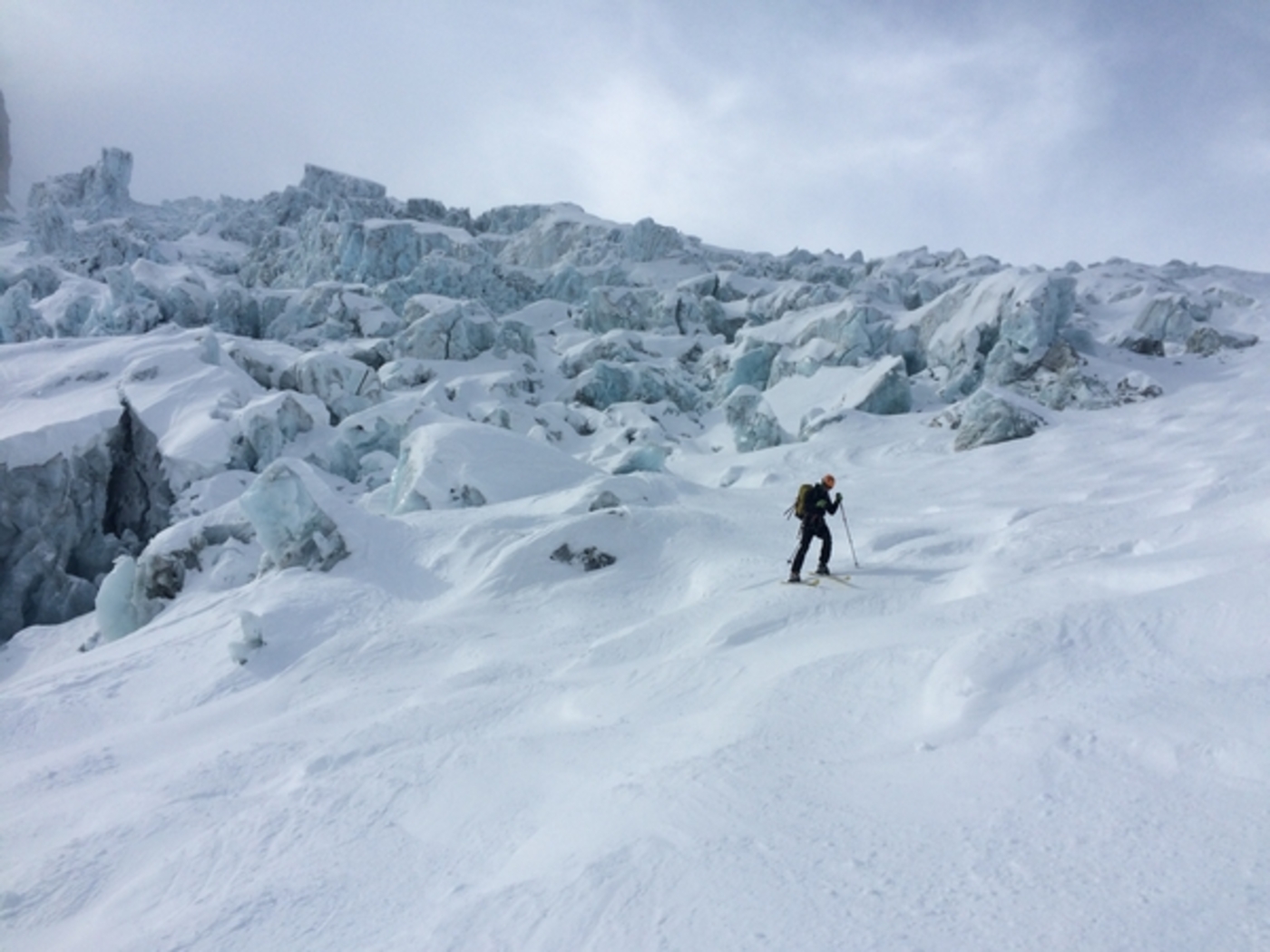 Raoul in front of one of the mayor serac zones 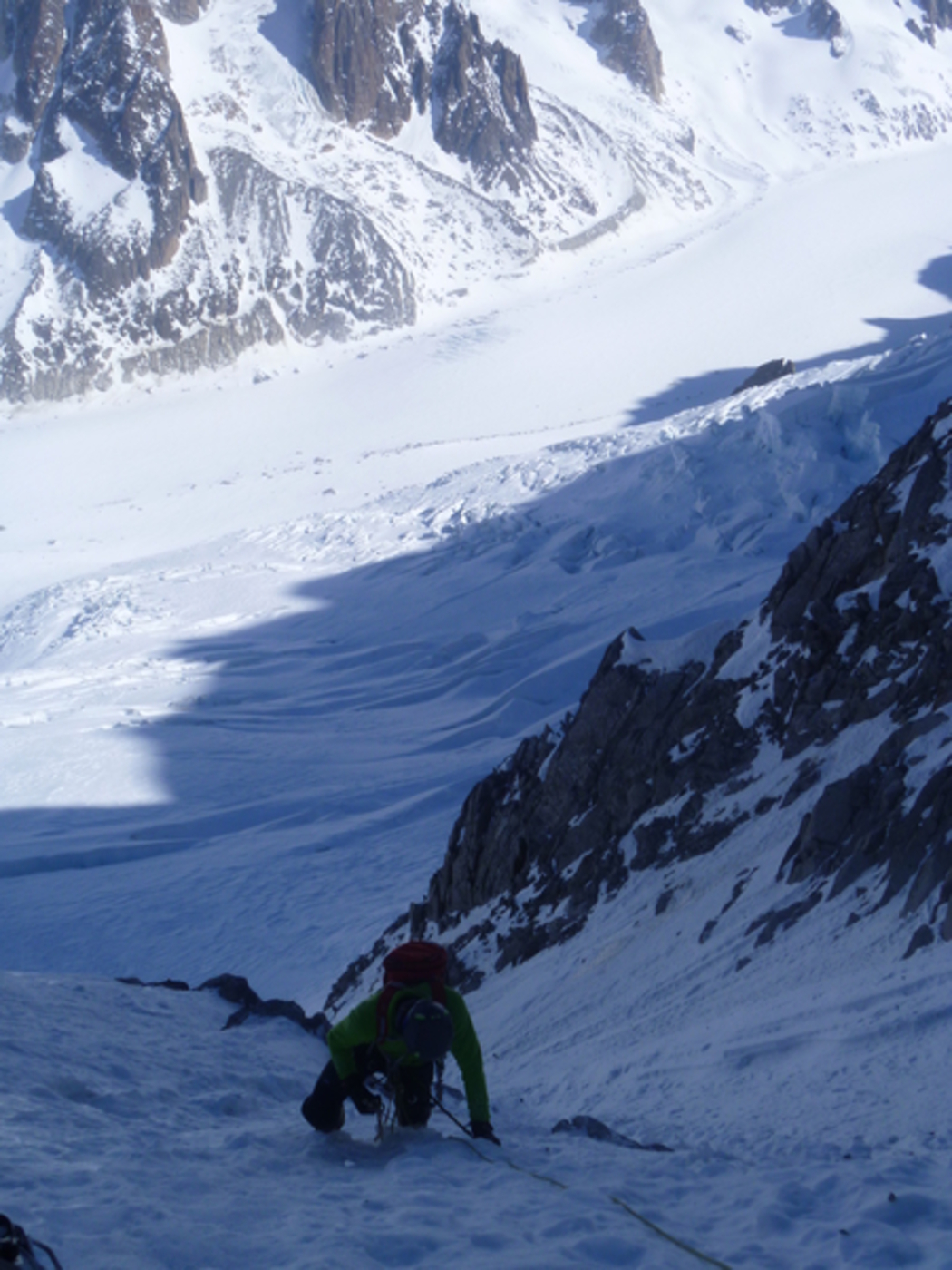 Tino in the Chevalier Couloir 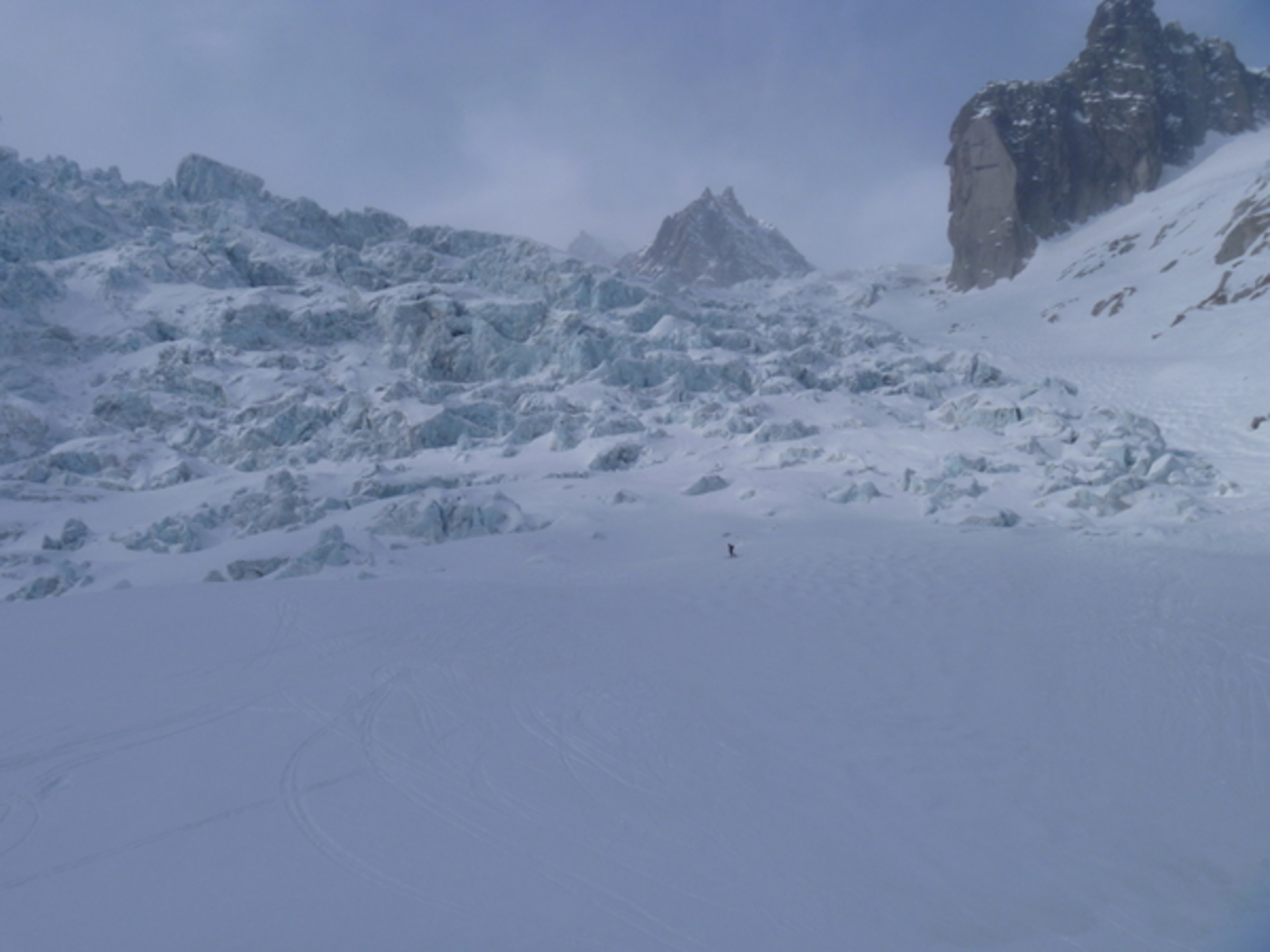 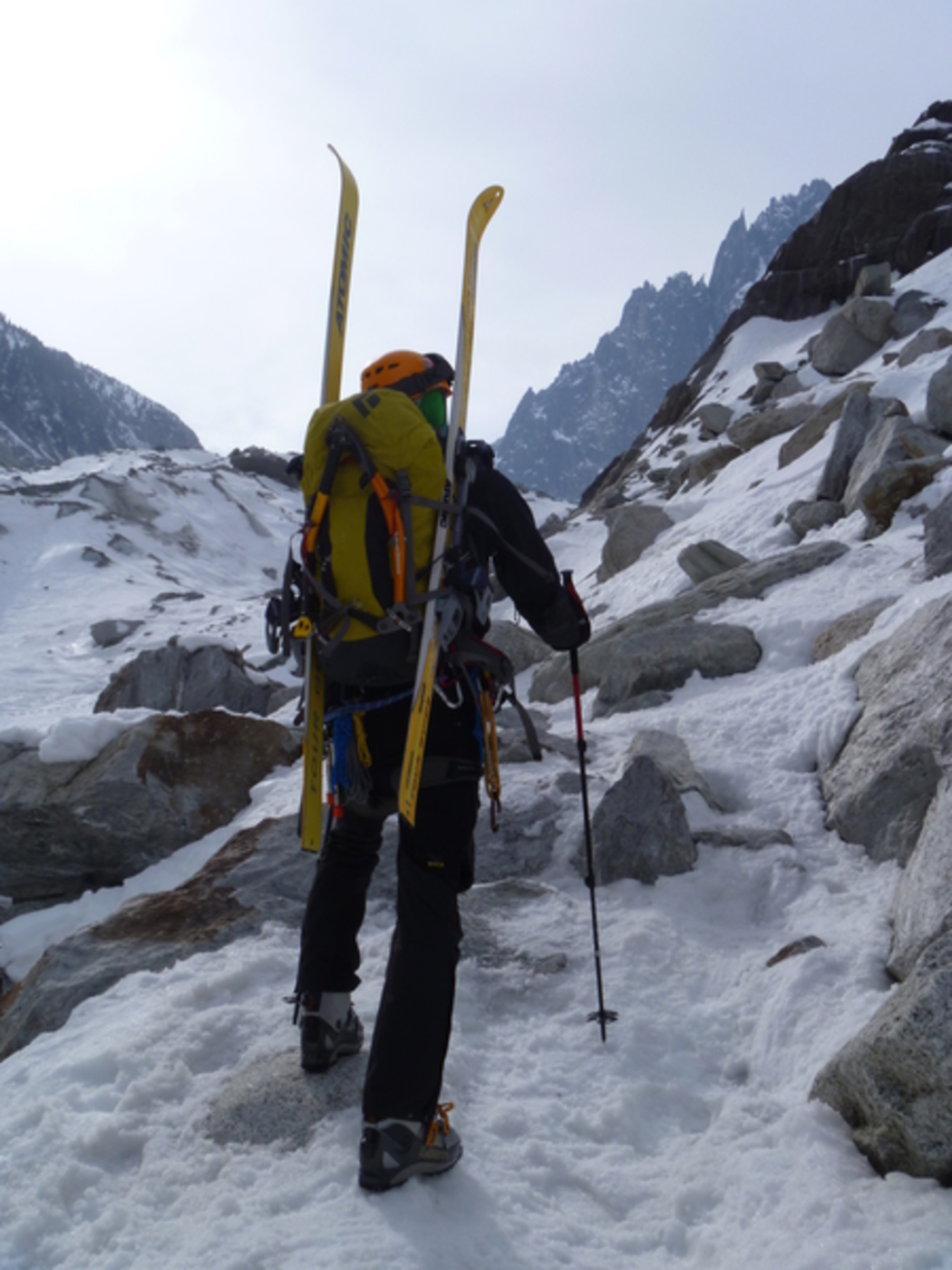 Raoul looking back on an amazing weekend