Excitement was high when we seven assembled at the outdoor centre Rock Steady in Bussum, in the centre of the Netherlands. This was the starting point for a mountain bike trip in the area called ‘t Gooi and Sticht. Rock Steady provided the equipment for those who had not their own. 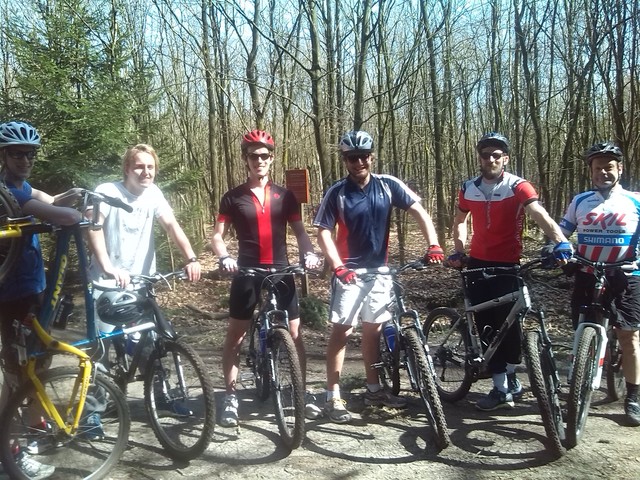 At 14.45 hrs we set of in the southern direction. First crossing the moorland Bussummerheide using the straight Doodweg, leading the St. Johns cemetery. We saw some local people walking their dogs, the men dressed in colorful trousers like pink, yellow or bright red and the ladies wearing expensive woolen ponchos. This stretch was used to get used the bikes. How does the gear system works and what happens when you only use your front brake? Using the newly constructed tunnel we could safely pass the N525 to reach the forest, also part of the nature reserve. This part of the reserve is a bit hilly with some nice steep climbs and descents. Continuing further to the south east we traversed the moorland and had to ride some sandy parts. Big long horn wooly cows were looking at us. In the distance we could see some prehistoric burial mounds. We did not allow us to study these items any further. The first, and only, serious climb was on an artificial - former garbage dump – hill near Anna’s Hoeve with a view of the small lake Laarder Wasmeer. We could not reach to summit due to a lot of wood debris. At the P of Anna’s Hoeve recreational area we had a little break with water and some food. 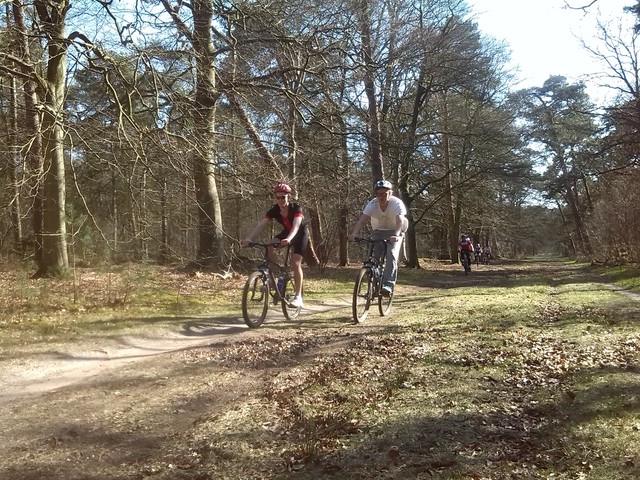 Some manmade structures, like a railroad and a highway, forced us to use some paved paths to reach the famous mountain bike trail of the Laage Vuursche. This is a constructed and maintained single track through this hilly forest. Due to the recent lack of rain it was not as muddy as it used to be, but still slippery. After some 5 minutes on this trail we had to stop for mechanical failure of one of the bikes: a broken chain. The nickname for students from Delft is bicycle repair man, this proved to be true! Some big tree trunks, bumpy parts, short curves and stretches of dunes made the trail really challenging. At some points we stopped for reassembling, letting faster people pass, take some water and food, and when waiting for the slower ones: work on your body tan.

For the return we used mainly a paved bicycle path through the forest and the gardens of castle Groeneveld. On these paths we could test the maximum speed of our bikes. Passing the A27 again we entered a more open forest were we could ride as we liked. On the border of the forest and the moorland we noticed a teahouse. This was already after teatime, being thirsty we decided to check it out for alternative drinks. With a nice local beer we admired the sunset on the moorland and were looking forward to our expedition this summer. To get back to the starting point is was again crossing the moorlands first using the old postal road and the Doodweg. The sun was really setting now so we had to hurry. 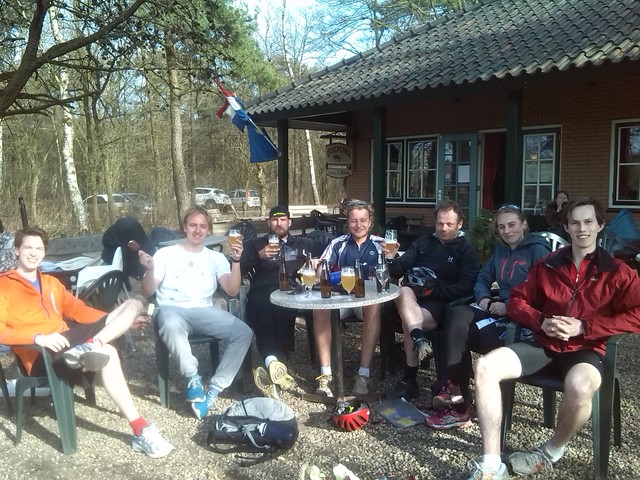