Last week, six of us went to the French Alps to get in some final snow and ice training. It was way too hot for June, the temperature did not get below 0° C, with 20's and a scorching sun during the day, causing headaches and slushy, slushy snow. But we did get in some good training meters.

Enne, Raoul and me were able to go two days earlier, extending our weekend to almost a full week. After using the campsite for a couple of hours, we got into the first cable-car up the Aiguille du Midi. The sun was out, and it was already warm enough for short sleeves! We traversed Pointes Lachenal (AD-), which was a very nice route to get warmed up and a little bit acclimatised. 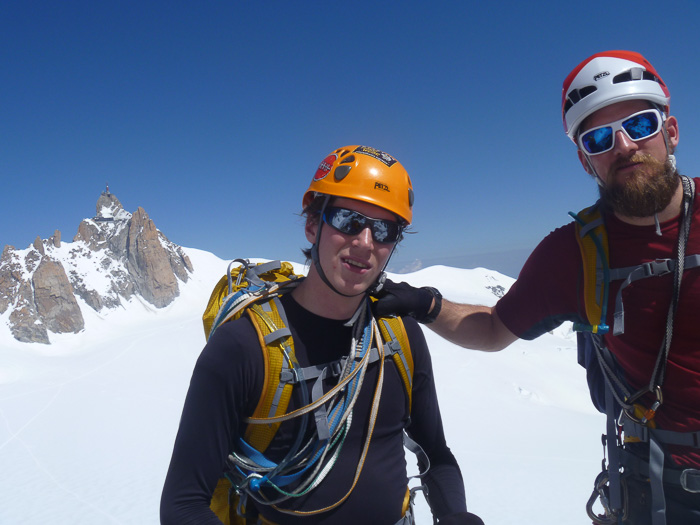 Raoul and me, with the Midi in the background. It's hot!

We had planned to sleep on the Midi plateaux, to be able to start early the next morning. However, the quick onset of mild hyperthermia on my part made that we chose to catch the last cable-car down again. Probably for the better, as sleeping at high altitudes (3400m in this case) usually does not work out that well when just coming from sea level. 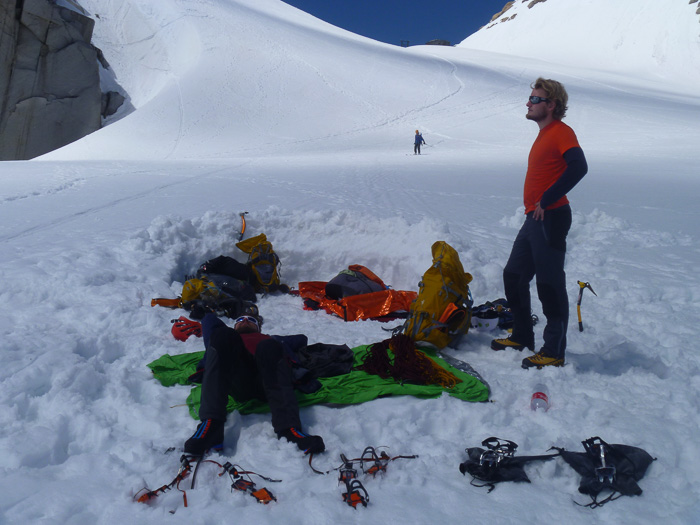 Chilling on the Midi Plateaux

The next day we hiked up to the Albert Premier hut with our ~16kg backpacks, where the others would join us the next day. Already being there, we set out to seek a route to climb. Combing through the numerous climbing guides, we finally set on the Voie Gabarrou-Freuchet, a small gully on the Aiguille du Chardonnet, up to where it would meet the famous Forbes Arrete route, and descent there (the whole route would take the three of us too long, especially with the tricky descent the AdC has). We could spot it from the hut, and it promised to be a nice gully climb with two patches of steep ice! 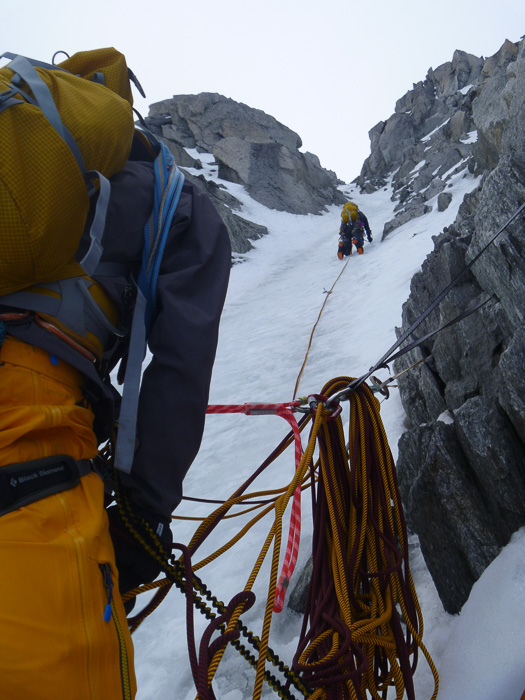 Me climbing up the ice, belayed by Raoul

And a gorgeous climb it was. The rock was good, the ice was good (nicely firming up the calves!) and going up to the couloir went quite smooth. 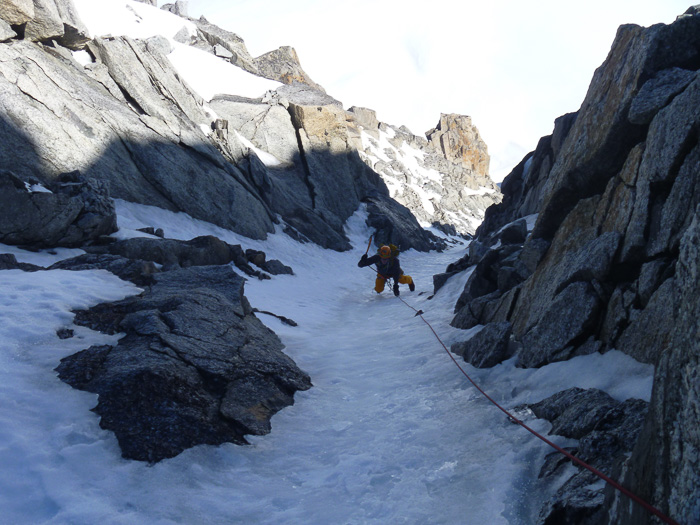 Raoul working his way up

From there on, we had planned to cross over to the left, avoiding a hanging snowfield that we were uncertain about (the normal route) and going straight over the top. Route finding was a little harder, and the last runout was enthralling, as we could not hear each other anymore, and I wondered whether I would make it to the top before running out of rope. I didn't and standing up top was exiting! Although it was not the summit of the mountain, it was a great top for us! 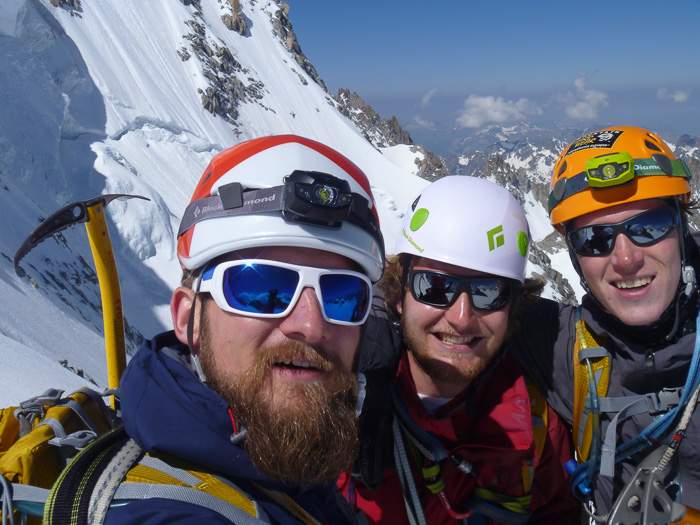 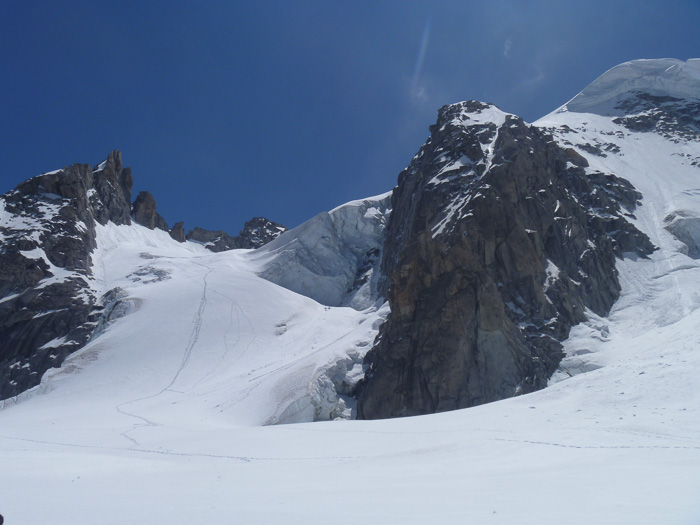 We ascended the gully on the right, and came down the snow slope on the left

Back in the hut we were united with Mariet, Boris and Floris, who were eager to try the Adventure Food we all carried up to try out. Yep, we ate out of bags the whole weekend, but they actually taste quite good! The next day we would climb the Couloir de la Table on the Aiguille du Tour. We set our alarms extra early (at 2:15) because of the high temperatures and the predicted thunderstorms in the afternoon.

When we got up, it had rained all night and was still drizzling... We decided to go anyway and see how the conditions were up higher. When we got to the route, the weather still sucked and the snow was very soft, so we decided to head back. Later that day — after a couple more hours of sleep — we walked on the glacier and descended some crevasses to at least do something, and get some ice practice in. 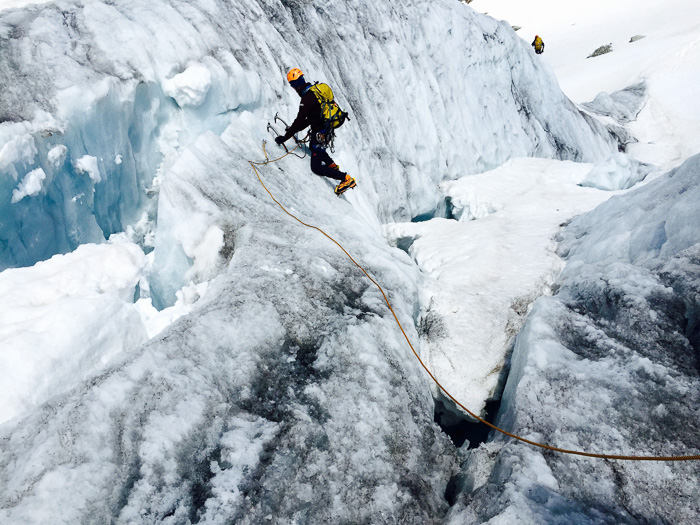 Boris on the glacier ice

The next morning, the conditions were much better. Over firm snow and under a clear sky we headed of to the Aiguille du Tour again. This was a very nice route, which we climbed in two groups of three. After the 200 meter couloir we climbed the 200m ridge in two's, up to the 3540 meter summit! 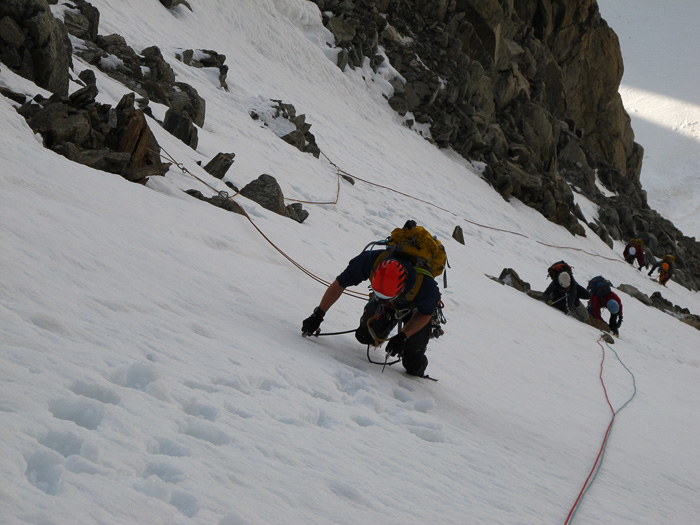 Me, Mariet and Floris, and Enne and Raoul in the couloir 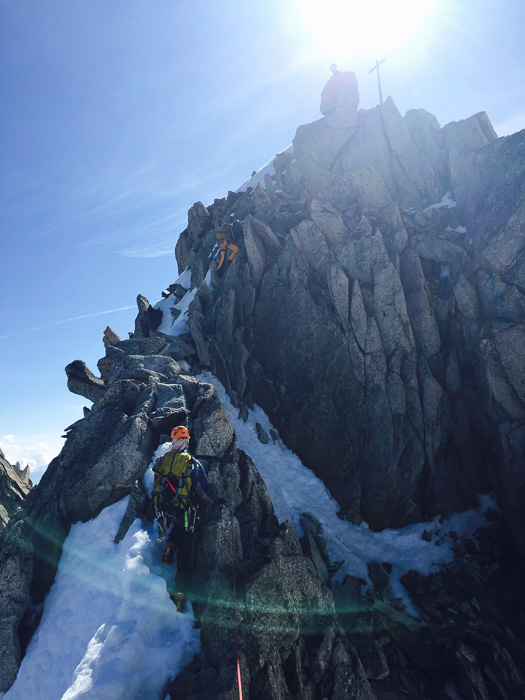 Boris, Raoul, and me on the final part to the sub-top 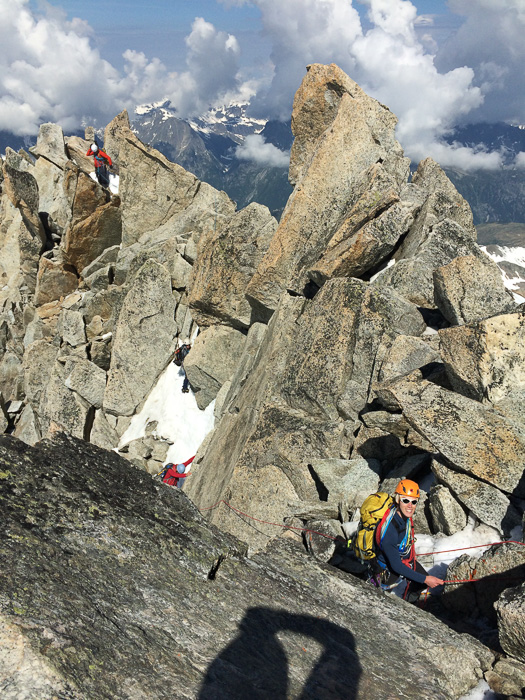 Top left to bottom right: Enne, Mariet, Floris and Boris on the last meters before the top 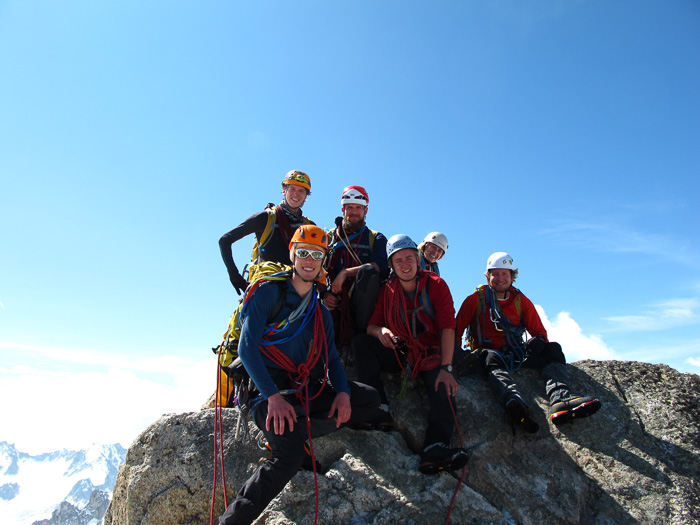 All of us up top

The last day, we settled for another route up the Aiguille du Tour, the Couloir de la Brèche, which was close to the hut, because we also had to get back down to the cars in the afternoon and drive home. We had set a firm time limit to turn around in order to be down in time. Due to the heavy snow (even some freshies!) we did not get up very far, so this one will remain on the bucket list (preferably with skies in winter time :).

All in all, it was a really nice training trip — and break from hard studying for most of us. Ready for KY! 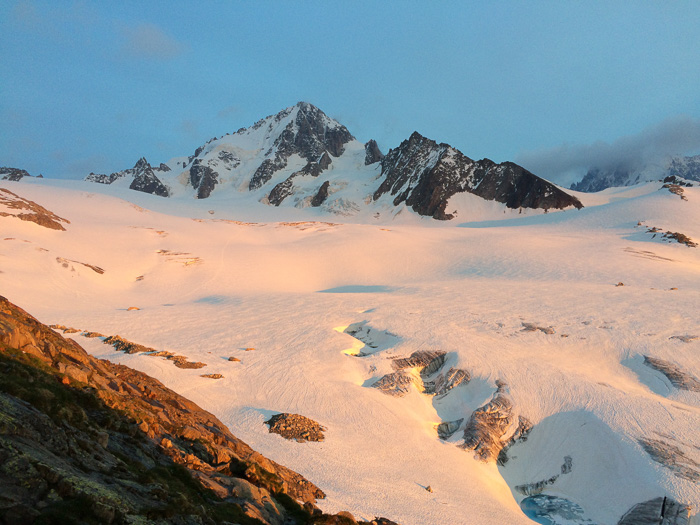 The sun setting on the Tour Glacier, with the Aiguille du Chardonnet in the back